TATOGGA LAKE — The ongoing blockade of Red Chris mine near Iskut, B.C., was planned last Thursday at a twilight meeting of the Klabona Keepers — a group of Tahltan elders and families who live in the area, near the headwaters of the Stikine, Nass and Skeena rivers.

By meeting’s end, a decision had been reached to try and halt operations at Red Chris by cutting off the operation’s supply corridors.

The recent tailings pond breach at another Imperial Metals operated mine, Mount Polley, had been the last straw for the Tahltan, who feared a similar disaster might strike their territory. Red Chris is a $500-million gold and copper mine on the Tahltan’s traditional territory that produces toxic tailing stored in a constructed pond much like the one that disastrously collapsed a week ago near Likely, B.C.

The Red Chris mine sits only a few kilometres from the community of Iskut in northwest B.C. and above one of the most pristine lakes in the world. Ealue Lake.

“How many years did we fight Imperial and we let them go?” Rhoda Quack, head of the Klabona Keepers inquired of her fellow clan members at the Thursday evening meeting.

“When we talked to them they told us the tailings pond is the same design as Mount Polley and that it works fine. Look at it now. We can’t have that happen here,” she said.

‘Until we say so’

As the blockade went up Friday afternoon, Red Chris workers looked out from the mine’s gate house and attempted to notify their superiors of the cars and trucks arriving to block the road.

Soon after, a small detachment of the Keepers approached the gate and asked to speak to the mine manager who later came down to the blockade as an RCMP officer rolled up to investigate. 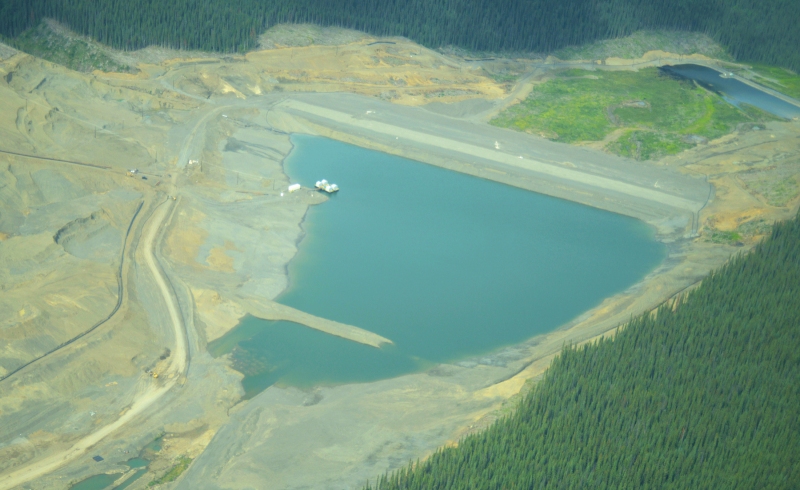 As a white pick-up truck with Red Chris Mine printed on the side in red ink pulled up, two senior workers stepped out and approached the line.

Flanked by his colleague on one side and the lone Mountie on the other, a man who identified himself only as the site operations manager asked the Keepers how long they expected to block the road.

“We’re not allowing anyone through,” the Keepers announced.

“Until when?” asked the site operations manager.

“Until we say so,” the Keepers replied.

The Red Chris employees looked to the Mountie for an explanation. The officer said they would have to get a court injunction before the blockade could be removed.

By Friday evening, the blockade was beginning to have an effect.

Just then, a white shuttle bus loaded with mine workers came barreling down the highway and pulled up to the blockade.

Realizing they weren’t going to make it through they took off, headed for a second entrance near Ealue Lake. Overlooked by the Keepers’ main blockade, the alternate entrance was still open.

Realizing the road was still open, the Klabona Keepers sent a crew after them in hot pursuit to stop the shuttle before it entered the mine property.

By the time the Keepers made it down the road, the shuttle had crossed the Coyote River and locked the gate behind them. It would be the last vehicle to enter the mine site.

‘Assurances are not going to work anymore’

Klabona Keepers stand watch on their blockade of the Red Chris mine in August.

Early Saturday morning, several cars pulled out from the mine gates. Workers moving out and heading for other sites told the Keepers operations were slowing down at the top of the mountain.

Within hours on the second day of the blockade, two Red Chris employees walked down to the blockade, now filled with elders and young Tahltan members, to bring word that senior administration officials were on their way back to the site to meet with the Keepers after analyzing the extent of the Mount Polley disaster.

The employees assured the Keepers the tailings pond a top the Red Chris Mine was perfectly safe. The Keepers remained unconvinced, demanding proof.

“We have serious concerns over your tailings pond. Assurances are not going to work anymore,” said one Keeper positioned on the blockade to the Red Chris employees.

“Business as usual is over.”

Link to story here: The Tyee